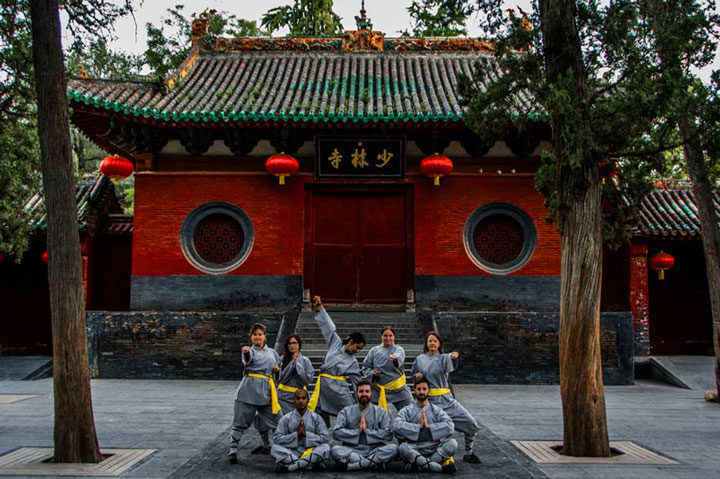 In the Summer of 2016, Integrative Medicine US arranged a 3 week Spiritual Qigong Retreat for seven students of Atlantic Institute of Oriental Medicine and one friend to visit the world famous Shaolin Temple in the Henan Province of China. Besides Kung Fu, Shaolin Temple has herbal formulas that have been kept secret for centuries and are still being used as Shaolin Medicine. In the past, the medical center was only open to the Shaolin monks. However, in recent times, they have opened it up to visitors from around the globe for acupuncture treatments. People have traveled from every continent to try their legendary medicine. They’ve even had officials like Vladimir Putin as one of their more well known patients. This was the first ever QiGong Retreat and group medical trip to be educated in Shaolin Medicine.

Typically, they only offer treatments at the medical center and brief lectures to guests. English is not commonly spoken in the area and it’s not easy to find a knowledgeable translator with experience in the terminology of Traditional Chinese Medicine. The QiGong Retreat group resided at a Kung Fu academy inside the Shaolin Temple National Park grounds, which is about five minute walking distance from the historical temple. Their daily routine included waking up for meditation at 5:30am, Qi Gong and Tai Chi practice from 6am-7am, Breakfast at 7am, Morning Kung Fu Training from 8am-11am, Lunch at 12pm, Chinese Medicine class from 2pm-4pm, Afternoon Kung Fu Training from 4pm-7pm and dinner at 7pm. On the weekends, students had free time for hiking the sacred Songshan Mountain, visiting Dengfeng for shopping and Tuina treatments and sight seeing at other well known UNESCO sites such as the Longmen Grottoes and the White Horse Temple near Louyang.

The Shaolin Medicine classes were taught by Monks and Doctors from the temple and covered subjects such as;  Tuina Massage, Cupping, Chinese Herbs, Medical QiGong, Moxa, Guasha, Meditation, Feng Shui for Longevity and the relationship between Martial Arts and Medicine. On the last day, the students presented their instructors with certificates from ATOM in appreciation for their teachings and for their dedication to the Shaolin Medicine Program. The QiGong Retreat trip was organized by Jonathan M. Fields of Integrative Medicine US. Mr. Fields is also a Martial Arts Instructor at Lost Legacy Kung Fu. During his time at the Temple, he was able to demonstrate his proficiency as an instructor and healer. He was awarded the rank of coach at Songshan Shaolin Traditional WuShu Academy and was asked to join the board of Directors for the International Meihua Quan Federation as well as the World Chan Medicine Federation by Grandmaster Yan Lin, the Executive Vice-President of Shaolin Temple and the inheritor of Shaolin Medicine.

In the fall of 2017, Mr. Fields will be organizing another spiritual retreat to: Shaolin Temple, WuDan Mountain, Yunan Province and Beijing to continue studying in Acupuncture, Kung Fu, Tai Chi, QiGong and Traditional Chinese Medicine. Please subscribe to our mailing list for information on how you can join future Spiritual Retreat & QiGong Retreat Workshops and Destinations. Acupuncture for Back Pain

Find a list of all our clinic locations at:
South Florida Acupuncture